Does morality require that we respect the lives and interests of nonhuman animals? The traditional doctrine was that animals were made for human use, and so we may dispose of them as we please. It has been argued, however, that this is a mere ‘speciesist' prejudice and that animals should be given more or less the same moral consideration as humans. If this is right, we may be morally required to be vegetarians; and it may turn out that laboratory research using animals, and many other such practices, are more problematic than has been realized.

« Animals and ethics Does morality require that we respect the lives and interests of nonhuman animals? The traditional doctrine was that animals were made for human use, and so we may dispose of them as we please.

It has been argued, however, that this is a mere ‘speciesist' prejudice and that animals should be given more or less the same moral consideration as humans.

If this is right, we may be morally required to be vegetarians; and it may turn out that laboratory research using animals, and many other such practices, are more problematic than has been realized.

1 The traditional view In some Eastern systems of thought, animals are accorded great respect.

The Jains of India hold that all life is sacred, drawing no sharp distinction between human and nonhuman life.

They are therefore vegetarians, as are Buddhists, whose sacred writings forbid all needless killing.

In the West, however, it was traditionally believed that animals were made for human use.

This idea, familiar from the Old Testament book of Genesis and elaborated by a long line of Jewish and C hristian thinkers, also formed part of Aristotle's worldview.

This was cosmology with a moral point.

A quinas, who emphasized that it was God himself who provided the animals for human use, made the point explicit: ‘Therefore,' he said, ‘it is not wrong for man to make use of them, by killing or in any other way whatever' (Summa contra gentiles).

A re there, then, no limits on how animals may be treated? One might think we have a duty to be kind to them out of simple charity.

But A quinas insisted that this is not so.

‘Charity,' he said, ‘does not extend to irrational creatures.' There was, however, one way in which animals could gain a degree of protection.

They might be the incidental beneficiaries of obligations owed to humans.

If someone has promised to look after your dog, he is obliged to care for it.

But the obligation is owed to you, not to the dog.

But once again, the point was to protect the men, not the animals.

(This has sometimes been called the ‘indirect duty view' - that we can have duties to animals, but only indirect ones.) This view might seem extreme in its near total disregard for nonhumans.

Nevertheless, the idea that animals are essentially resources for human use was accepted by almost every important thinker in the Western tradition - including such figures as St Francis, who is popularly but wrongly believed to have advocated a more charitable stance.

For this view to be defensible, however, there must be some difference between humans and other animals that would explain why humans have a privileged moral status.

For Aristotle, the difference was that humans alone are rational. Religious figures added that man alone was made in the image of God.

These explanations seemed sufficient until 1859, when Darwin's On the Origin of Species (1859) transformed our understanding of man's relation to the rest of nature (see Darwin, C .).

2 Challenges to the traditional view Darwin demonstrated that humans are not ‘set apart' from other animals, but are related to them by evolutionary descent (see Evolution, theory of).

It is no accident that we bear such a startling resemblance to the apes.

The same is true of our rational faculties.

Man is not the rational animal, for other animals also possess a degree of rationality.

How could it be otherwise, when our brains developed from a common source? Darwin went so far as to declare, ‘There is no fundamental difference between man and the higher mammals in their mental faculties' ( 1859: 35 ).

Such differences as do exist, he said, are matters of degree, not kind.

Today it is widely accepted that Darwin was right, at least in the main outlines of his view, and this poses an obvious ethical dilemma: if humans are similar in so many ways to other animals, and humans merit moral protection, then why should other animals not merit protection too? A s Asa Gray, Darwin's friend in A merica, put it, ‘Human beings may be more humane when they realize that, as their dependent associates live a life in which man has a share, so they have rights which man is bound to respect' (1880: 54).

Darwin himself regarded cruelty to animals, along with slavery, as one of the two great human moral failings.

Another nineteenth-century development also cast doubt on the traditional exclusion of animals from the range of moral concern. The utilitarians, led by Jeremy Bentham and John Stuart Mill, argued that morality is fundamentally a matter of seeking to promote happiness and prevent suffering (see Utilitarianism).

But Bentham saw no reason to limit moral concern to human suffering.

In fact, he suggested that disregard for animals was a form of discrimination analogous to racism: The day may come when the rest of the animal creation may acquire the rights which never could have been withholden from them but by the hand of tyranny.

The French have already discovered that the blackness of the skin is no reason why a human being should be abandoned without redress to the caprice of a tormentor.

It may one day come to be recognized that the number of the legs, the villosity of the skin, or the termination of the os sacrum are reasons equally insufficient for abandoning a sensitive being to the same fate….

The question is not, Can they reason? nor, Can they talk? but, C an they suffer? (1789: 311; original emphasis) It must be noted, however, that for most of Western history the moral status of animals did not seem to be much of an issue, and philosophers did not write very extensively about it (Bentham's discussion, for example, is confined to a footnote). The subject began to be widely discussed among philosophers only after the publication of Peter Singer's Animal Liberation in 1975.

3 The contemporary debate One of the striking things about the debate concerning animals is that it is possible to reach radical ethical conclusions by invoking only the most common moral principles.

The idea that it is wrong to cause suffering, unless there is a sufficient justification, is one of the most basic moral principles, shared by virtually everyone.

Yet the consistent application of this principle seems to lead straight to vegetarianism or at least to the avoidance of factoryfarmed meat.

The argument is disarmingly simple.

In modern factory farms, animals who are raised and slaughtered for food suffer considerable pain.

Since we could easily nourish ourselves without eating them, our only reason for eating them seems to be our enjoyment of how they taste.

So, unless one thinks our gustatory pleasure is a sufficient justification for causing torment, the obvious conclusion is that we are wrong to produce and consume such products. Other arguments appeal to less commonplace notions.

The word ‘speciesism' was coined by Richard Ryder, a British psychologist who ceased experimenting on animals after becoming convinced it was immoral, and popularized by Singer in Animal Liberation.

Speciesism is said to be analogous to racism.

Consider, for example, the very different standards we have for using humans and nonhumans in laboratory research.

Why do we think it permissible to perform a painful and destructive experiment on, say, a rhesus monkey, when we would not perform the same experiment on a human? Someone might suggest that, say, humans are more intelligent than monkeys, or that their social relationships are more complex.

But consider mentally retarded persons whose cognitive and social capacities are no greater than those of the animal.

Would it be permissible to perform the same experiment on them? Many people think that, simply because they are human, it would not.

This is speciesism laid bare: there is no difference between the human and the nonhuman in their abilities to think, feel or suffer, and yet the human's welfare is counted for more.

This line of thought suggests that animals may be treated differently from humans when, and only when, there are morally relevant differences between them.

It may be permissible to admit humans, but not other animals, to universities, because humans can read and other animals cannot.

But in cases where there are no relevant differences, they must be treated alike.

So we may not treat an animal in any way in which we would not be willing to treat a human with the same intellectual and emotional capacities.

Such arguments have, of course, provoked lively opposition.

Many philosophers find it difficult to believe that mere animals could have such powerful claims on us.

Morality, they say, is fundamentally a human institution established to protect human rights and human interests (see Morality and ethics ).

C ontractarianism, which has emerged in the latter half of the twentieth century as the principal rival to utilitarianism, makes this point most clearly.

A ccording to this view, morality rests on agreements of mutual benefit.

Morality arises within a community when each person agrees to ‘play the social game', respecting other people's rights and interests, provided others will do so as well.

This agreement makes social living possible, and everyone benefits from it (see Contractarianism in ethics and political philosophy).

But animals are unable to participate in such agreements, so they do not come within the sphere of moral protection.

The animal rights movement, with its principled opposition to such practices as factory farming, the use of animals in commercial and scientific research, and the fur trade, has become a familiar part of contemporary life.

Rarely, if ever, have philosophical thinking and social activism been linked so closely.. » 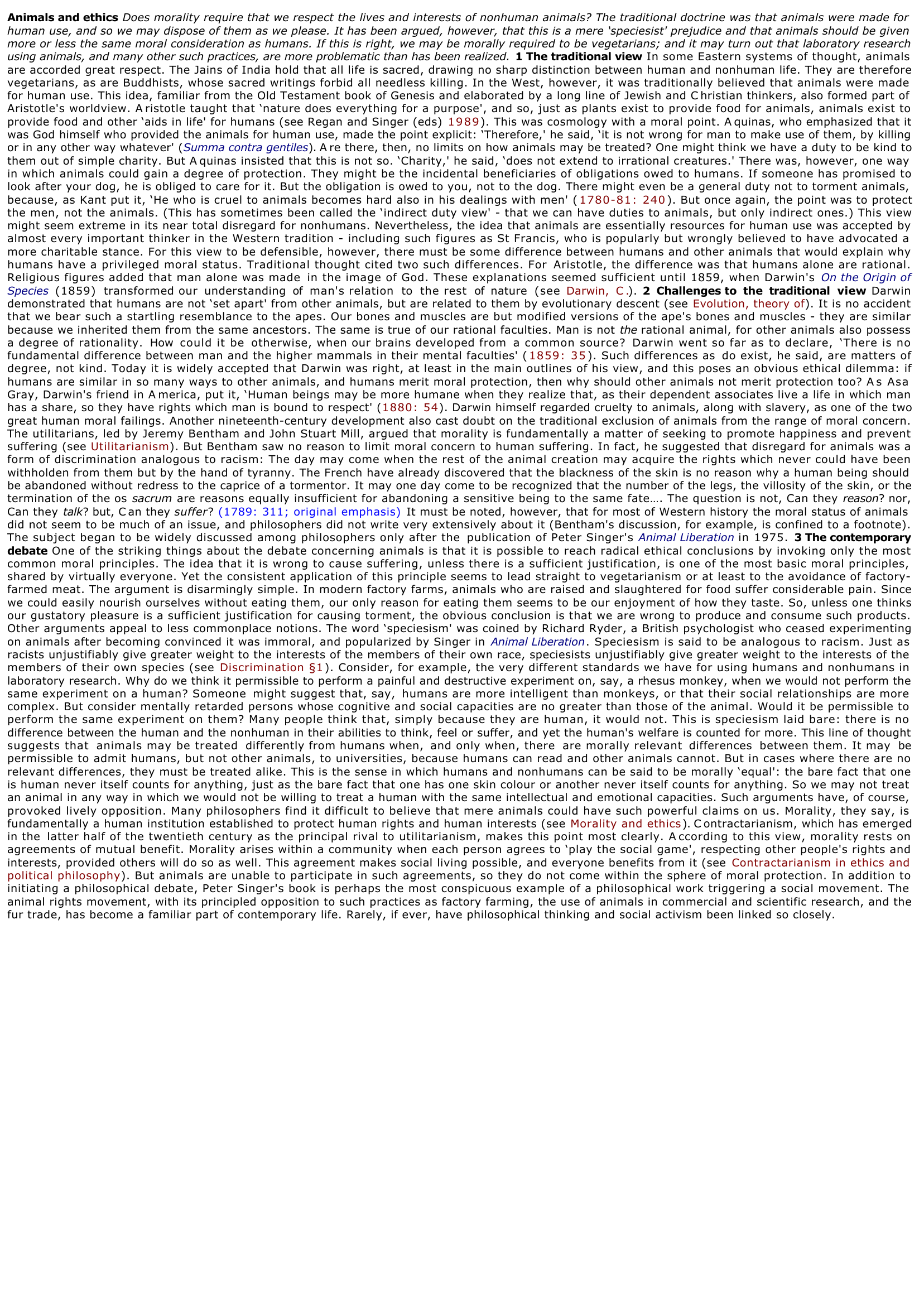