The impact of social media on our societies through the changes in lifestyles, diversity and human rights.

« B00707265 The impact of social media on our societies through the changes in lifestyles, diversity and human rights. Societies have been existing for a long time.

There are signs from complex societies that existed a millennium before ours (Breunig, July 2012).

Today, however, they are becoming more diverse and bigger.

Physical boundaries are being pushed and cultures are mixing themselves.

A higher variety of elements are affecting our civilizations.

Changes in mentality and interests among people have spotlighted a few of them, which have been with us for a long time.

Others appear with the global development of cultures, sciences, technologies, medicine, etc.

This essay will give some suggestions to the question; How has the apparition of social media impacted our societies, positively or negatively? through the analysis of their impact on lifestyles, diversity and human rights.

For this purpose, a basic explanation of what a society is will be given.

Then each topic will be analysed, starting with lifestyles, continuing with diversity, and finishing with human rights.

After that, a pooling of them will be done to bring to light if these topics also have an influence on each other.

To conclude, this essay will analyse if the merging of these topics and social media was for the better or the worse and how we could improve its impact on our societies. First, what is considered a society? The Cambridge dictionary has multiple definitions for that word.

The first one tells us it is “a large group of people who live together in an organized way, making decisions about how to do things and sharing the work that needs to be done.

All the people in a country, or in several similar countries, can be referred to as a society.”.

However, this definition excludes the fact that in the same country, people can have different ways of living.

Yet, different lifestyles in the same country can create conflict, preventing people from living in harmony and a functioning society.

For example, this was the case for the Rwandan genocide, during which one ethnicity started killing the other (Melvern 2021).

Still, the idea of people living together in a structured environment is a solid base to explain the term society.

Another definition, still from the Cambridge dictionary, tells us it is “an organization to which people who share similar interests”.

This still retains the idea of an internal structure but goes beyond the limits of physical proximity.

That idea is more relevant today than ever with online communities and all the groups emerging on different social media. Therefore, it is possible to consider two types of societies, a physical one and a virtual one, both influencing our lives.

The latter will be the major concern for this essay. The key aspect discussed in the next paragraphs is going to be how lifestyles can affect our societies.

First, it should be pointed out that a lot of factors can affect someone's way of life. They can be cultural, linked to personality, a result of beliefs, derived from others' habits, or even from an outside event.

It is noticeable that those factors can come from within or from our environment. These days lifestyles are not only a way of existing but also a way to express oneself. Followers of some habits create groups where they share their common interests and may try to promote them to others.

This allows some people to feel like they belong and can even end 1/5. » 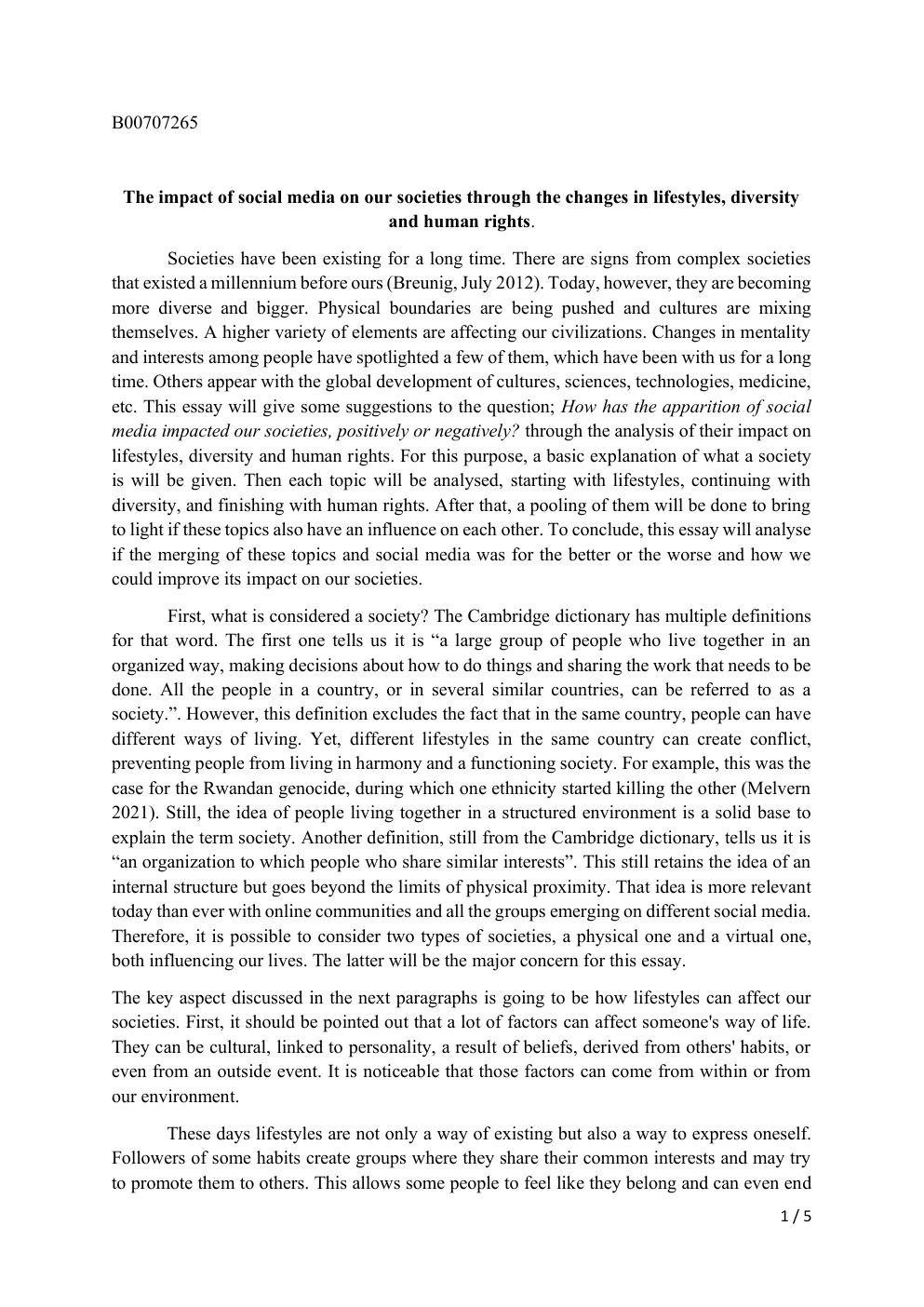