The madness of laicity

« BEHIND CLOSED DOORS: The madness of Laïcité In France, we have this saying which can be roughly translated as: "Do what you want, as long as you do it behind closed doors".

At first sight it is nothing special, but I remember that as a child it had a huge impact on me.

Why was that? What happens behind closed doors can only be referring to two taboos: sex, or worse...

When I was a child, this connection seemed strange to me, but it is especially when I grew up that I tried to understand how it had come to this.

Why should a woman wearing a veil, or a man praying on his prayer mat, be as taboo as adult things? These people, though religious, seemed to me to be pious and virtuous...

but from what others were saying, this was not the case.

The reason: the French concept of "laïcité" (also laicity or French secularism).

This essay will attempt to reconcile state and religious discourses in the French context by trying to explain the notion of 'laïcité' and by looking at its application in society, which is often an obstacle to inter, as well as intra-religious harmony. Secularism is defined in any legislation or dictionary as the "policy of separating civil society from religious society inside the state" and the "impartiality or neutrality of the state with regard to religious denominations." In other words, laïcité is opposed to official religious recognition.

Secularism in France is mostly a History of confrontation between two ideologies of France throughout the nineteenth century.

On one hand, there are the Catholics, and on the other, there is the Third Estate (the people). Secularism has gone through three major phases.

Firstly, under the French Revolution, because during the drafting of the Declaration of the Rights of Man and of the Citizen of 1789, it was written for the first time: "France is a secular Republic [...] It ensures the equality 1 before the law of all citizens without distinction of origin, race or religion....; " .

Furthermore, the second phase was introduced by the law of 9 December 1905 relating to the separation of the Churches and the State and which introduced the concepts of freedom of conscience, free 2 exercise of worship and separation of worship from the Republic.

Finally, its third phase began in 2004 when a law prohibited ostentatious signs: "in public schools, middle schools and high schools, the wearing of signs or clothing by which pupils ostensibly manifest a religious affiliation is prohibited", however, it is said that these religious signs are acceptable 3 as long as they are "discreet " .

To some extent, it would have been better to ban them outright.

The people would have rebelled, of course, but this idea of "discretion" underlines the taboo surrounding religion.

A believer is therefore asked to wear their cross, hijab, turban etc.

"discreetly", just as a couple would be asked to love each other "discreetly" in public. What psychological torture! This has made people paranoid and the medias are constantly debating about such issues.

Everywhere, in the public space, people tend to stare at passers-by and arguing: "Is he/she discreet enough?”.

Officially, the 2004 law was intended to ease the integration of migrants and foreigners into society.

However, it is clear that behind the word "migrants" was the word "Muslims", referring to Muslims from former French colonies or territories, notably the Maghreb and Middle Eastern countries as well as Pakistan and 1.

Declaration of the Rights of Man and the Citizen, First article, 1789 2. 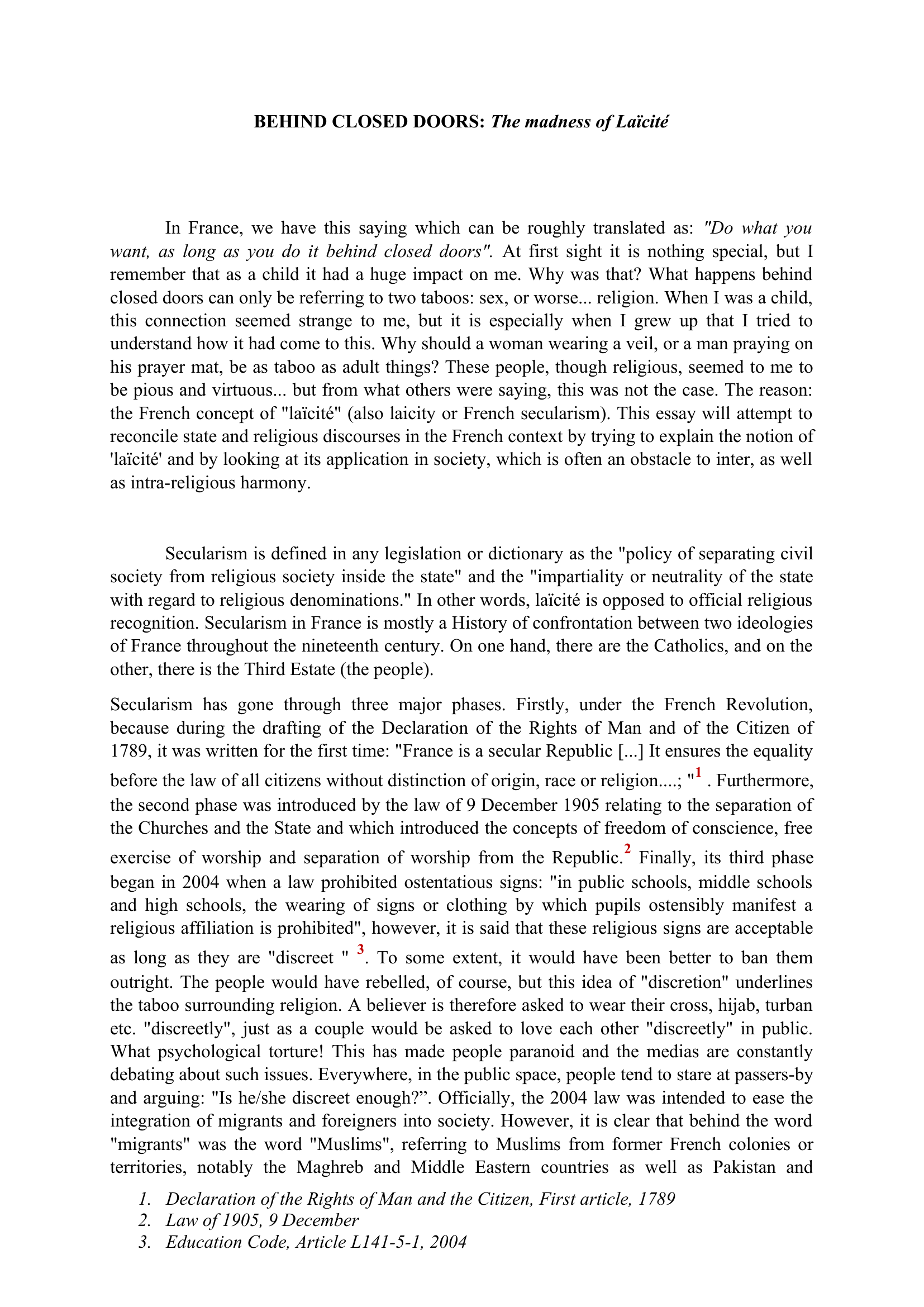