THE DIFFERENT FORMS OF DEMOCRACY 1.

THE PRINCIPLES AND VALUES OF DEMOCRACY 1.

THE DIFFERENCES BETWEEN DEMOCRACY AND AUTHORITARIAN RULE CONCLUSION INTRODUCTION The notion of democracy reappears in the 13th century from the rediscovery of the works of Aristotle.

The term then remains very rare and is never seen as a positive ideal.

But democracy began to be rediscussed in confined intellectual circles, often perceived as a necessary component within a mixed government which appeared as the model first in the Italian city-states of the Renaissance and then during the 17th century in England.

Only the Dutch philosopher Baruch Spinoza [1632-1677] will openly support democracy in the name of the defense of freedom and the necessary protection by the State.

Even though philosophers are increasingly discussing the notion, democracy is still conceived as an old, distant, unenforceable and unstable regime. I.

Etymologically, democracy comes from the Greek dêmokratia which means "power" (kratos) "to the people" (dêmos).

Power is therefore based on the direct decision of the people.

Reflecting on democracy questions the notion of "people" and that of "citizen".

Democracy raises the question of the exercise of sovereignty, the balance of popular power or a way of life. The term democracy is polysemic : - Democracy can be a political system, a form of government, in which the people are sovereign. - Democracy is also by extension a form of society, a way of governing oneself or a system of values based on equality and freedom. In his Gettysburg speech of 1863, US President Abraham Lincoln formulated the democratic ideal as the The notion of people is polysemic.

It can be: All individuals in a given territory subject to a State; A group of people living in society, forming a more or less homogeneous cultural community. The people, holders of sovereignty, would meet in a government, (an organization, a political structure of the state) to govern.

» The notion of people is polysemic.

It can be: - All individuals in a given territory subject to a State; - A group of people living in society, forming a more or less homogeneous cultural community. The people, holders of sovereignty, would meet in a government, (an organization, a political structure of the state) to govern.

Many issues are then raised: - Who among the people is able to exercise citizenship, to participate in the affairs of the city: from what age? - Are foreigners who live on national soil integrated? - What application for popular sovereignty? - Should the people vote laws within the framework of a direct democracy or should they elect representatives who vote on their behalf, rulers who act in the interest of the people, within the framework of a representative democracy? - Is abstention taken into account in the vote of the people? The term "democracy" is therefore not simple to define. II.

THE DIFFERENT FORMS OF DEMOCRACY There are three forms of democracy: representative, direct and participatory. 1.

Citizens delegate their power, from local to European level, to representatives (territorial councillor, deputy, etc.) and rulers (mayor, President of the Republic) elected after elections are held. 2.

Direct Democracy Direct democracy is a regime in which citizens directly exercise power. In Switzerland, democracy is direct. 3.

THE PRINCIPLES AND VALUES OF DEMOCRACY 1.

Separation Of Powers Developed by Locke and Montesquieu in the 17th and 18th centuries, the theory of the separation of powers was at the origin of the thought of democracy in the 18th century.

This theory aims to assign the different functions of power (executive, legislative and judicial) to specialized and independent bodies, in order to limit arbitrariness and prevent abuse by rulers. Montesquieu highlights that a regime where the three powers are not separated quickly becomes tyrannical: a person or group of people has the opportunity to make laws and apply them. 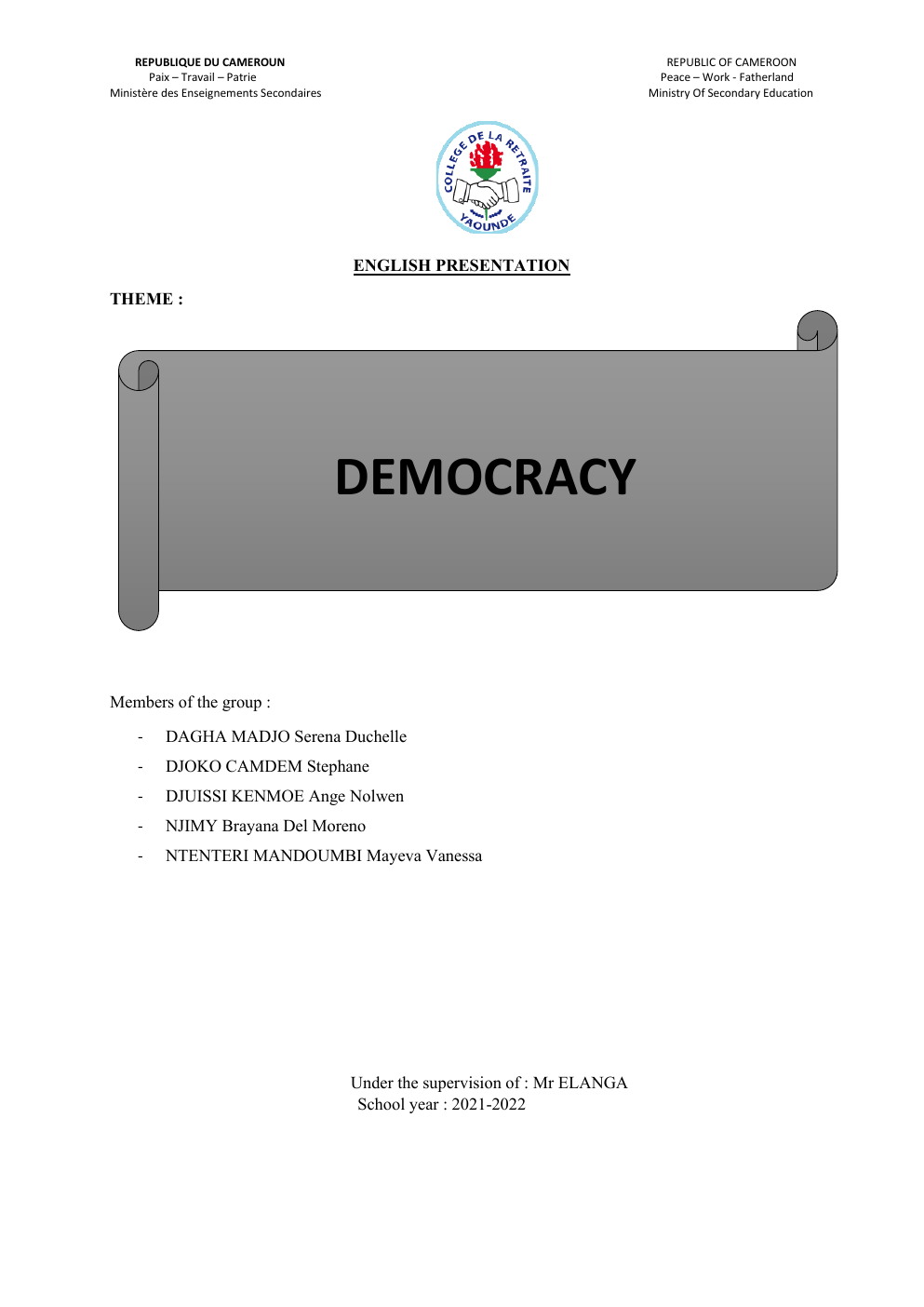